Can studies in transgenic mice shed light on neurological complications associated with SARS-CoV-2 in humans?

Achieving Success With Your Health and Fitness

The 2019 life-threatening coronavirus disease (COVID-19) that has swept the world over the past 12 months has not affected animals with corresponding severity. In order to understand the mechanism of severe disease, animal models were used. This includes a mouse model that expresses human angiotensin converting enzyme 2 (hACE2) under the cytokeratin 18 promoter (K18-hACE2). A new pre-print appearing on the bioRxiv* server says it may not be a faithful model of fatal human infection with severe acute respiratory syndrome coronavirus 2 (SARS-CoV-2). 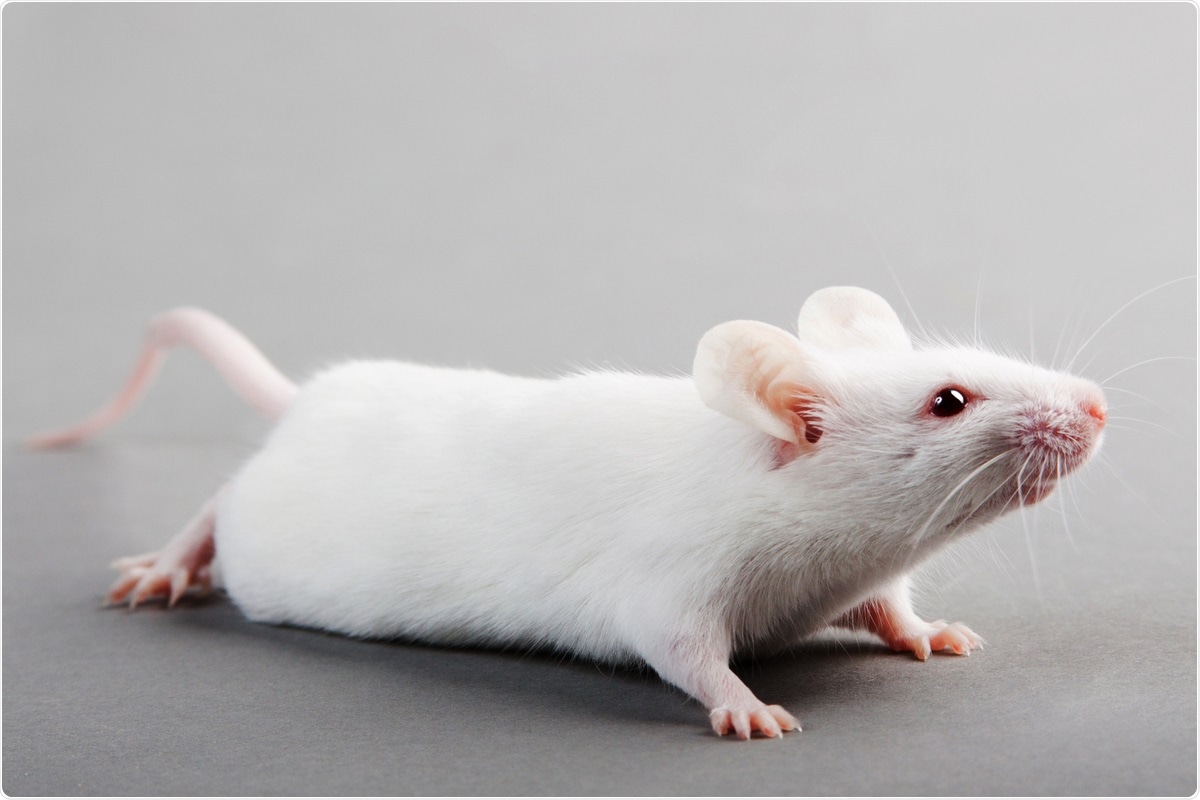 In most cases, COVID-19 causes respiratory illness with a broad spectrum of symptom severity, from mild to severe. Critical illness usually ends in acute respiratory distress syndrome (ARDS), often with multi-organ dysfunction. A subset of infected patients also exhibit neurological features, including headache, anosmia and ageusia, dizziness, delirium, and ischemic stroke. It is believed that the olfactory lining is the gateway for the virus to enter the central nervous system (CNS).

There are few animal models that help study the virus. This is mainly due to the fact that SARS-CoV-2 enters human cells via the hACE2 receptor. On the other hand, the virus has a much lower affinity for murine ACE2, which makes transgenic mice a necessity for preclinical research.

These transgenic mice were observed to express 100% fatal disease when infected. The mechanism by which death occurs is still unknown, although there have been signs of lung inflammation and reduced respiratory function. However, the virus has been reported to invade the central nervous system in these mice.

The investigators of the present study therefore analyzed the course of the infection for two weeks after infection. Expression of hACE2 occurs primarily in epithelial cells of the respiratory and intestinal tract, with a low level of expression in the brain. The scientists therefore sought to explore the relationship between the nature, severity and outcome of this infection in these transgenic mice and the hACE2 expression models, in order to find out whether the neuroinvasion was linked to the lethal nature of the infection. .

The researchers found that these mice still developed a fatal infection after SARS-CoV-2. Before death, they had neurological signs. Only two mice were alive after 14 days, both of which were not seriously ill.

These mice were found to have inflamed lungs, with high viral loads in the lungs and brain. Viral load in the lungs peaked 2 days after infection (dpi), but at 4 dpi in the brain. Viremia was negligible. 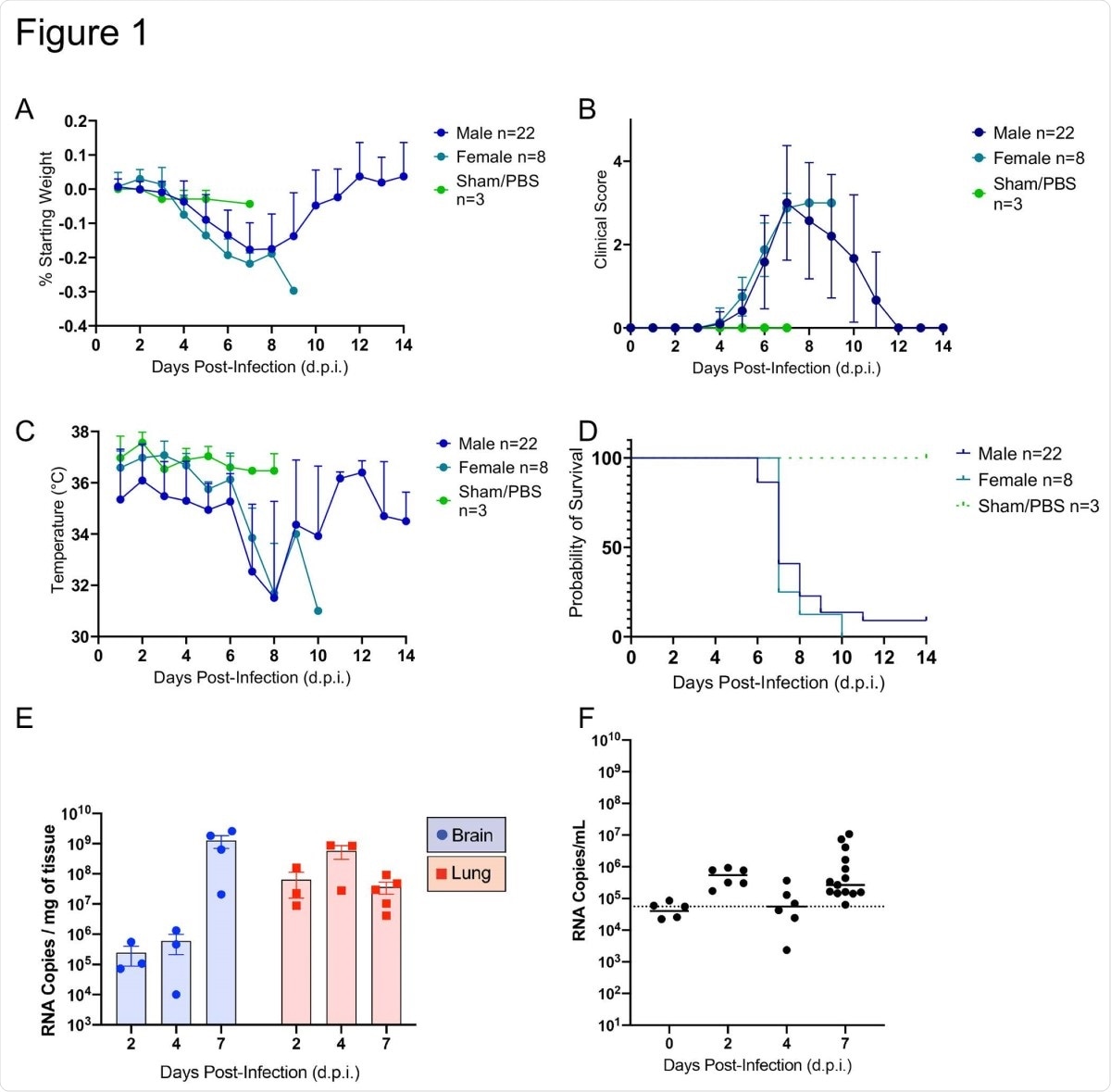 The upper respiratory tract showed signs of mild and transient inflammation, returning to normal at 7 dpi. The olfactory neuroepithelium showed no signs of inflammation at any time, despite the presence of viral antigenic load and abundant RNA. However, both fell to undetectable levels of 14 dpi.

The study also showed some degree of interstitial pneumonia, with viral antigens and RNA found in lung parenchyma, mostly type I alveolar lung cells. A few type II alveolar cells were also involved. The peak was reached at 4 dpi. The severity of the pneumonia peaked at 7 dpi, affecting about a third of the lungs.

In the two male rats that survived 14 days, there were scattered areas of interstitial pneumonia, but no detectable viral antigen or RNA.

The bronchial epithelium and pulmonary vasculature remained unchanged throughout, without hyaline membrane formation in the lungs, vascular clots, or syncytia formation. These are, however, characteristic of human infection. The features of pulmonary involvement observed in these animals contrast with the features of severe COVID-19 disease. This suggests that “the lethality observed in this model could be independent of pulmonary inflammatory mechanisms”. Indeed, the strong infiltration response of lymphocytes and histiocytes has been associated with rapid and effective control of pulmonary infection.

The researchers found that the lethality of SARS-CoV-2 is potentially mediated by neuroinvasion, in about 85% of infected mice, at 7 dpi. The likely route of invasion is retrograde transport through the olfactory bulb, via axonal processes passing through the olfactory neuroepithelium. Affected neurons showed a widespread cytopathic effect in the brain and spinal cord.

SARS-CoV-2 infection does not reflect the ACE2 distribution

The study also shows that the lungs poorly express hACE2 in these transgenic mice, indicating that this is not the only factor determining susceptibility to the virus. Conversely, other types of cells which do not express this receptor, such as type I alveolar cells, have been widely infected, but the hACE2 + bronchial epithelial cells have remained uninfected. This suggests that viral entry into lung cells does not depend on the expression of ACE2 in these mice.

The researchers also found that if hACE2 mRNA was found in clusters of cortical neurons and other parts of the brain, murine ACE2 was expressed in the endothelium of blood vessels in the brain. This suggests that ACE2 may not be translated in neurons in mice. Cerebellar Purkinje cells are also not infected with SARS-CoV-2, although they do express hACE2 mRNA. This confirms the hypothesis that “ACE2 is probably not the only host factor associated with neuroinvasion and that other ACE2 independent entry mechanisms contribute to the neuroinvasion and spread of SARS-CoV. -2 in this mouse model. “

What are the implications?

The study brings out some important conclusions. First, the K18-hACE2 transgenic mouse model is widely used for the study of SARS-CoV-2 and for possible therapeutic measures. The basis for such use is the common hACE2 receptor shared by cells of this mouse and man, as well as the lethal expression of SARS-CoV-2. It also helped to understand how lung damage occurred in COVID-19.

However, it also diverges from the human disease COVID-19 process in several important ways. It does not show the development of diffuse alveolar damage (DAD), the formation of hyaline membranes, the activation of the coagulation system with extensive microthrombosis, resulting in multi-system damage.

In the mouse model, in contrast, hACE2 is only partially associated with virus tropism and disease outcomes. The real cause of the lethal results is neuroinvasion resulting in damage to neurons, which is independent of hACE2 expression. This contrasts with the Golden Syrian hamsters, which primarily suffer from lung damage but invariably survive.

The study also highlights the need to select the right parameters to understand the neurological features of SARS-CoV-2 in mice, rather than conventional features such as weight loss and tousled fur reminiscent of diseased animals. Otherwise, the efficacy of therapeutic drugs and T-cell vaccines could be falsely underestimated in this model.

Finally, the study highlights the existence of other receptors involved in neuroinvasion, which cannot be identified by in vitro experiences. Neuropilin-1 is found in the nose, brain, lungs, liver, and kidneys. Since K18-hACE2 mice are among the only two animal models that show this neuroinvasion, it is useful for studying neurological disease processes following infection with this virus, including other mechanisms by which it accomplishes cell entry, and to estimate the effectiveness of therapeutic and preventive measures.

bioRxiv publishes preliminary scientific reports which are not peer reviewed and, therefore, should not be considered conclusive, guide clinical practice / health-related behaviors or be treated as established information.

health > news medical > Can studies in transgenic mice shed light on neurological complications associated with SARS-CoV-2 in humans?
Powered by WordPress | Designed by TieLabs
© Copyright 2021, All Rights Reserved
Open chat
1
Powered by
Hello
Can we help you?